GM and I have always celebrated 3rd Feb as our Valentines day, as that's the day we first got together as a couple, many years ago. So, for us, 14th Feb has always been just a normal day - but not any more!

This year it was a Thursday. Our post comes quite late in the day, and on this particular day one letter popped through the letter box at roughly 2pm - I remember because I was lying on the sofa intending to have a short nap. "It's for you" GM said, handing me a white, hand-written envelope with a BP logo in the top left-hand corner. The return address was not one I recognised so I had absolutely no idea of the significance of this quite ordinary correspondence. 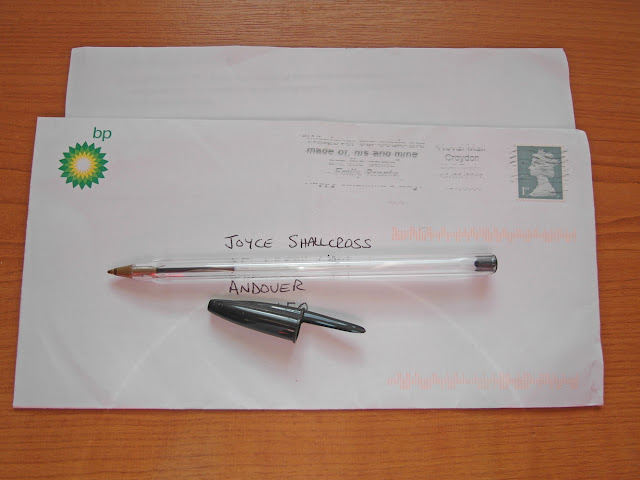 As GM took himself off into the kitchen I opened the letter, and read the first two sentences. All of a sudden my whole life changed. I can’t even begin to describe the emotions that I felt, it was so enormous, I was completely overwhelmed. Before I read further I must have called out because next thing I knew GM and I were both in the hallway, me with tears running down my face. "What is it?" he asked, concerned for my tears. I handed him the letter, he also read the first two sentences and then we were  holding each other very, very tightly, both of us with tears running down our faces. I can’t remember how long we stayed like that – it could have been a few seconds, or a few minutes, time stood still, until it occurred to me that I hadn’t even finished reading the letter. This letter changed my life. It contained news for which I had been waiting for over 50 years. Happy, happy news. I read the rest of the letter, I read it again, then again, and then again, not able to stop the flow of tears. I really, really cannot remember much about the rest of the day, all I can remember thinking, several times, was that outside of our house the world was still turning and people were going about their normal everyday stuff, but how could this be? The world is now a totally different place, I am living a totally different life, everything is suddenly so wonderful and I am so, so happy I could literally burst. (I feel I must add in here that my life isn't bad anyway, I am incredibly fortunate, but this was just something extra that was huge.)

Later in the day, with shaking hands, I scribbled off an initial reply – it was far too important not to reply immediately, and thankfully the sender had included two stamped self-addressed envelopes. I continued in an emotional daze for the next couple days before reality kicked in. I knew that several other people needed to be told this news, so plans were made for an initial trip to Wiltshire on the Sunday with GM and then a trip to Surrey and Kent on my own during the week, which luckily was half-term week so I was able to double up and spend a few precious hours with each of my GDs. I was nervous, but needn’t have been, everyone I told was incredibly positive and supportive, and when I arrived back home at the end of the week I was able to compose a more detailed response, which included my email address, and which went in the post on the Saturday, just 9 days after receipt of the initial letter.

Life got back to normal with a bump after the weekend when I had my three days of GD5 minding, so all my energies were directed towards her and her needs. It was on my return home on the Wednesday afternoon that I received the email in response to my second letter, containing details that had previously been withheld - another incredibly emotional moment. As it happened, FO and CH had given us a bottle of champagne for Christmas (thanks both x x), which GM had decided to chill, so that evening we shared it over tea, to celebrate our amazing, wonderful news.

So, although now, after three weeks, I have got used to the news, my life has changed and will never be the same again. A hole in my heart that I have walked around with for such a long, long time has been filled, I am still super-charged with emotion and tears are still very close to the surface, but two-way communication by email is now regular and we look forward to the next stage of this incredible journey in a couple of weeks time.

For those of you reading this who already know the contents of the letter, I would be most grateful if you would refrain from commenting as there are still members of my extended family who need to hear this news directly from me.