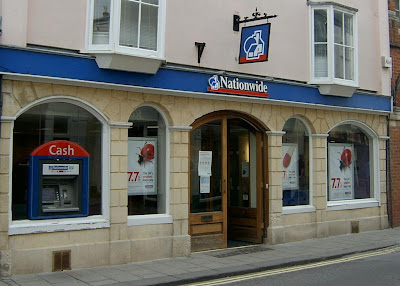 For historical reasons, both Alex and Oli have bank accounts with Nationwide.
Alex and Oli have both recently moved, Alex from a student flat into a private rented house, Oli from student accomodation back here with us.
Alex and Oli both separately advised Nationwide of their change of address.
Alex and Oli have both had their cash cards and accounts frozen within the last week.
Can you see a pattern emerging here?
Yesterday Oli went into the Devizes branch (where he found [his words] a gorgeous blonde behind the counter), and after a couple of winks he managed to uncover what had occurred.
Apparently - presumably in both instances - Nationwide had written to the OLD address asking for confirmation of the NEW address, and as both the old addresses are empty for the duration of the summer vacation these letters weren't forwarded, so dear old Nationwide, having not received confirmation of the new addresses froze the accounts.
So, Nationwide, we suggest perhaps you ought to rethink your procedure with regard to student accounts?
Posted by joy at 6.8.10

Hmm food for thought, what an experience you encountered with them. By the way feel free to have another go at the cupcake thing, was over a two week period, you may have known that but wrote over one week in your comment :0)