Icicles hanging from our cars 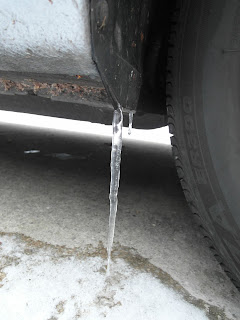 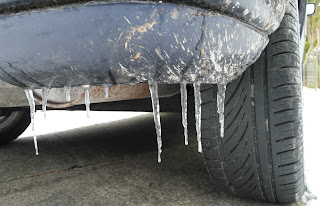 As we are now into December, and the time is fast approaching when various of our sons come home for the festivities, I thought I had better give the two spare bedrooms a quick vax over and make up the beds, so thats what I did yesterday.
The larger of the two rooms has, at some stage in the past before we arrived, had the radiator removed, I'm guessing it was too hot, as the airing cupboard is also in that room. However the 2 fixings for the rad are still in place, although blanked off (or so we thought).
As a general rule we switch the thermostat down overnight and Rog switches it back up when he makes the early morning tea. This morning when he switched it on the radiator in our room made really strange noises, like a bath being filled up, and he said that he thought the boiler had lost pressure overnight, probably due to a leak. He had a quick look round but couldn't see any sign of a leak, and as the temperature came up OK, he said that he would probably think about replacing the boiler in the spring, as this one has been a bit problematic from day one.
Later on, after breakfast, when I went round opening the curtains I went into the back room, and it smelled a bit funny, and I noticed that the carpet looked slightly darker in one corner. On further inspection I found it was sopping wet, so I gave him a shout and said "I've found your leak".
By a process of elimination we worked out that I must have knocked the valve while I was vaxing, which opened it very slightly and it started to leak and had been leaking for almost 24 hours!
Who in their right mind would remove a radiator from the wall and leave a valve that could be opened to leak! And who in their right mind would buy a house with a valve on the wall and not check that it could be opened to let water out!
Ho hum, at least we wont now have to fork out for a new boiler in the spring! 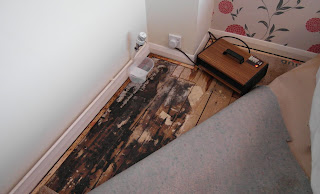 Why would anyone move a rad because the room was too hot anyway? Most people would just turn it off??

So true, just turn it off. But maybe they wanted to free up the wall space for wardrobes or something.